10 Bits of Kit You Wish You Had at Work 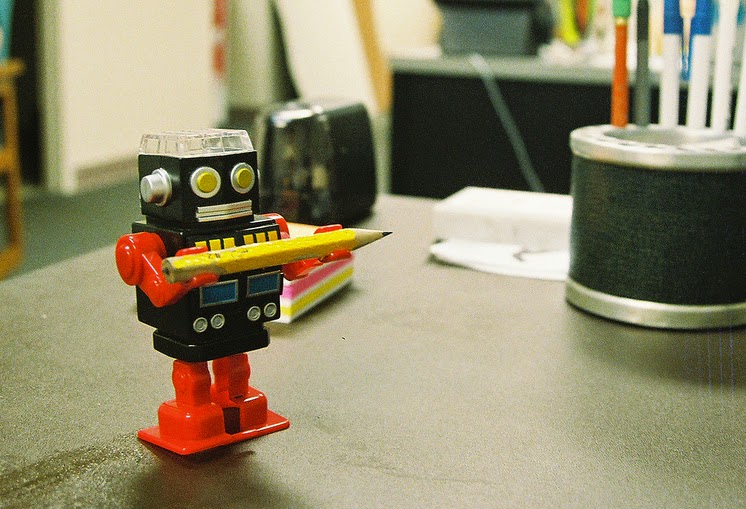 With Facebook now releasing details of their new product ‘Facebook at Work’, and clearly no expense spared in coming up with a snappy title (although this idea was something I talked about years ago!), I got to thinking about other technologies that I wished we had at work – with necessary tweaks obviously!

So here’s my top ten of products/software/equipment that I wish were in my work environment and would make me an even more awesome employee than I already am.


1 – Facebook at Work.
Well, why not? I like my workmates, I even talk to them sometimes about non-work stuff, but do they need to see my embarrassing photos uploaded by my actual ‘friends’ of hideous incidents from 1994 onwards. In a word, no.  However, having the ability to share documents, work on projects together and be able to use social tools to keep in touch and keep on top of events in work would be great.

2 – Food Drones.
Amazon have just begun trialling package deliveries in deepest, darkest Cambridge but there are loads of complications with that – power lines and very predatory felines are two that I can think of.  However, mini drones that deliver food to my desk (maybe from the staff restaurant? – although sadly, there is no staff restaurant here at Bravo Towers).  Imagine Ethel the cook with the drone remote control aiming a drone loaded with a huge BLT at annoying Adrian’s (in accounts – as that’s where annoying Adrians work) head. Brilliant.

3 – Full-size holograms.
I can’t stand video conferencing. There is something unnatural about staring at a camera across to fellow employees in another location – although guaranteed, their video conference location is always cooler than your faceless and dull conference room. However, what if you could have a conference table where you could beam a full-size Chad from the States, Bruce from Australia and Dieter from the German office (I may have selected some stereotypical names there). Adrian from accounts can make his own way to the meeting. Taking this concept a step further into a procurement context, we could beam in buyers and suppliers to negotiations or even auction events. As long as no virtual punch-ups ensue. Can holograms cry?!

4 – Minions.
Ok, this isn't quite a technology but anyone with kids has probably seen Despicable Me. Well, I want some of them to do my bidding. I would also like them to talk in that pseudo-French type voice that they had in the movie. I would get them to deliver my emails to my fellow colleagues – by hand – personal touch and all that. All the while building a space rocket to steal the moon, obviously.

5- A desk Isolation/Sleeping pod.
Anyone old enough will remember those desks that when you lifted the lid, a typewriter would appear. I'm not old enough but I did see them on TV once. Anyway, I would like to lift the desk to have a sleeping pod appear for when I need to ‘rest’ and recuperate. Especially after our Bravo Brekkie Fridays...quick snooze to sleep off some of that bacon and sausage hangover. Delightful.

6 – That Amazon Shopping App.
I saw this on the advert for the new Amazon Fire phone. Take a picture of something and it searches Amazon for you to find said product. With sufficient tweaks, when we are running out of pens, quick photo of the last pen in stock and voilà, it’s on order. Just as long as my fellow colleagues don’t get snap happy and start taking photos of iPhones, unmentionables, shoes or handbags!

7 – Google Contact Lenses.
Mainly because Google Glass still looks a little silly. If we had Google Lenses we could look up those annoyingly big words that people use in meetings and then quickly download a whole set of latest research to our left eyeball.  People would fall over in awe, until everyone gets a set, then I imagine it will get pretty dull, pretty quickly. Everyone would then know everything whilst simultaneously knowing nothing!

8 – Babelfish (like the one from The Hitchhiker’s Guide to a Galaxy).
This would allow us to fully converse in all of the world’s languages without sounding like a 5 year old that flunked French. Not that it has to be in the guise of a fish. I was thinking more of a hearing aid that would allow us to translate what is being said and then speak back our response in our own language – which our fellow colleague's babel hearing aid would translate for them...simples! Again, taking this back to my line of work, this would allow us to deal effectively and professionally with a global supply base and not feel like you have been fleeced because you didn't understand half the conversation.

9 – Wireless Everything.
No need for power cables, internet cables, batteries, etc. Our furniture would be wireless chargers and drip feed electricity to our devices. Just don’t spill your can of coke on it, that wouldn't be pretty.

10 – Smart Work Clothes.
I used to work in an office where if someone opened the window, everybody froze. Window closed, everybody melted.  It was deeply annoying and no two people seemed to be content with the office temperature. Well, if we could have work clothes with in-built fans/heaters that would allow us to choose our temperature. This would allow me to go sub-zero when I'm being grilled at the next prospective client demo. I need this in my life.

I'd love to know what tech you guys would like to see in your office. I thought about putting some exercise related office technology in there but I'm just too lazy.

Let me know what you would have!